Earlier this year, 19-year-old Nikolas Cruz opened fire at Marjory Stoneman Douglas High School in Parkland, Florida. Baseball coach and school security monitor Andrew Medina told detectives he saw the suspect, whom he recognized as a troubled former student, exit an Uber with a backpack and a large duffel bag and enter the school, according to CBS News. Medina immediately radioed another coach and security monitor, David Taylor, and told him to “keep your eyes open.” When Taylor heard gunshots, he hid in a nearby janitor’s closet.

School resource officer Scot Petersen was also on the scene but did not enter the school because he thought the shooter was outside, he said. Petersen told the sheriff’s office he had heard shots, prompting a lockdown of the school, but by the time first responders arrived, it was too late. Cruz killed 14 students and three staff members and injured 17 others in one of the worst school shootings in U.S. history.

A Rise in Active Shooter Incidents

Tragedies like the one in Parkland, Florida, have steadily been on the rise for the past two decades, with the FBI reporting a total of 250 active shooter incidents in the United States from 2000 to 2017. (The FBI defines active shooter incidents as “one or more individuals actively engaged in killing or attempting to kill people in a populated area.”) 20.8 percent of these incidents happened at schools and institutions of higher learning.

2017 was the most violent year on record for active shooters, with 30 incidents and 729 reported casualties. This spike was largely due to the shooting at the Route 91 Harvest Festival in Las Vegas, which killed 58 people and wounded 489 others.

When the dust settles after active shooter incidents, families and towns are left to recover both emotionally and financially. The material costs alone can be devastating for school districts and governments: “litigation, compensating victims, paying for funerals, providing trauma counseling, reconstructing or refurbishing new buildings, and investing in new security measures to prevent another attack, to name a few” (Governing Magazine).

Just securing the crime scene at Marjory Stoneman Douglas High School, for example, will cost taxpayers more than a million dollars a year while the shooter’s case goes to trial. That’s in addition to the cost of the victims’ funerals, which were paid for by the Florida Attorney General’s Office along with counseling for surviving victims and other students. The school district also received $25 million to tear down and rebuild the part of the school where the shootings occurred.

The Limits of General Liability Policies

The extreme costs of active shooter incidents have many school districts debating how effective general liability policies are at covering these events. According to Governing Magazine, traditional insurance policies require a lawsuit to be filed to activate coverage, a process that can take months or even years. And this coverage often doesn’t provide the level of compensation that will stave off further litigation from victims — an issue that Parkland, part of the Broward County Public School District, is now familiar with.

The school district is now facing potential lawsuits from the families of the 17 people who were killed and the 17 victims who were injured, along with others who were affected by the trauma. But the school board’s insurance policy reportedly limits liability to just $300,000 per incident. Todd Michaels, an attorney who represents the families of two victims killed during the shooting, said that if the district doesn’t adequately compensate victims, “we’re going to make sure they’re held accountable for their behaviors.” 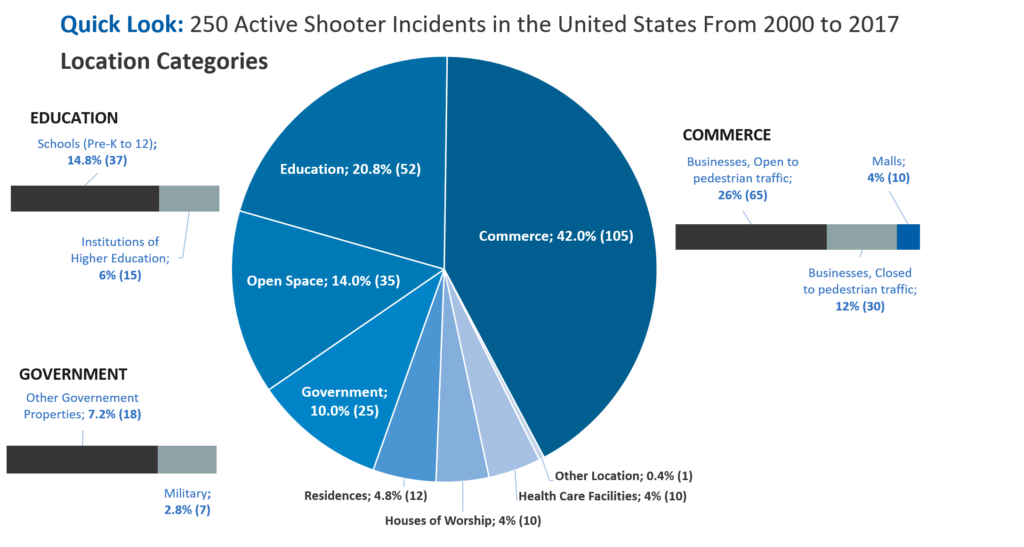 Many school districts are now turning to active shooter insurance policies as a way to mitigate these types of financial risks. Rather than needing a lawsuit to be filed to activate coverage, active shooter policies typically go into effect as soon as an attack is committed on a school district’s property. These policies generally cover attacks with any weapon — not just guns — and pay for a variety of associated expenses, including victims’ medical bills, extra security costs, business income losses, and traditional liability costs for lawsuits, according to Governing Magazine

“We probably have seen a tenfold increase in inquiries since Parkland,” says Paul Marshall, an insurance broker for McGowan Program Administrators, a provider of active shooter insurance. At least seven South Florida school districts have purchased about $3 million of active shooter coverage from McGowan since the February attack. But these policies offer more than just financial coverage to schools. The greatest value might be in their proactive risk assessment and mitigation strategies.

“These policies offer more than just financial coverage to schools. The greatest value might be in their proactive risk assessment and mitigation strategies.”
-McGowan Program Administrators

Let’s imagine, for instance, that the security system at Marjory Stoneman Douglas High School had facial recognition technology that immediately recognized Cruz, barring him from entering the building. Or that the security monitor who first spotted the former student had been able to immediately notify other staff, alerting them of a potential danger. Or that the school officer who thought the shooter was outside was able to instantly view the perpetrator’s exact location, enabling him to neutralize the threat.

These are the types of preventative measures, in addition to things like social media monitoring and coordination with local police, that many school districts are looking to insurance companies to help them implement. It’s the main reason why the Palm Beach County School District, the fifth largest district in Florida and the 10th largest in the country, decided to purchase active shooter insurance. “We wanted the risk assessment and training service” that came with the coverage, said Dianne Howard, the district’s director of risk and benefits management.

Compared to general liability policies that offer reactive coverage on a limited basis, active shooter insurance not only covers the financial costs of incidents, but it also helps school districts save lives by preventing these attacks from happening in the first place.