How First Responders Use 3-D Structure Mapping to Save Lives

It’s common knowledge that first responders work in dangerous environments. Across the country, they help ensure public safety by responding to rapidly changing natural and man-made threats. Because of these dangers, first responders require tools that will help them understand their environment so they can respond quickly and safely.

First response teams have little control over the environments they work in, as well as limited visibility. Knowing structural information about a site before sending a response team inside can be the difference between endangering or saving lives.

Traditionally, first responders have had to enter sites without prior knowledge of where victims are located, which exits are available, and where potentially dangerous chemicals are stored. If they did have access to building information, it was generally limited to 2-D floor plans that didn’t adequately convey what type of environment first responders were walking into. Finding up-to-date blueprints is rare, meaning that teams were often handicapped by incomplete or inaccurate information. In such high-pressure settings, these details are often a matter of life or death.

For example, in the event of a fire, are there specific sections of a building that are less structurally sound and need to be avoided? Where can teams find the utilities switches to turn off the building’s gas and electricity? Where are the building’s cameras located, and how do teams access the live footage? Which sections of a building have the highest concentration of potential victims? Having answers to these questions can help first responders to execute their jobs as effectively as possible.

Fortunately, 3-D mapping technology has now made it easier to enhance situational awareness for first responders. Federal and municipal governments are increasingly investing in 3-D mapping and other IoT technology because of their potential to transform emergency-response preparedness. With growing interest and support from the public sector, first responders across the country are adopting innovative technologies to improve operations and enhance public safety.

In 2008, students at Ohio University designed and launched a 3-D mapping project called the Immersive Video Imaging Network (IVIN). Funded by grants from the Department of Homeland Security and the Columbus Urban Area Security Initiative, OU students developed a software program that stitches together photos of locations to create a videogame-like map. These 3-D blueprints were designed as a tool to assist police officers, firefighters, and soldiers in a way that 2-D floor plans could not.

The IVIN project is currently being implemented to support first responder units in Columbus. By receiving 3-D blueprints before they enter dangerous locations, teams will be much better equipped to stop disasters in their tracks. The project also models emergency scenarios for training purposes and strategy design. Eventually, the goal is for the tool to incorporate contextual information such as the presence of flammable chemicals, any concerning building materials, or which doors of a building are locked at what times. John Bowditch, director of Ohio University’s GRID (Game Research and Immersive Design) Lab, predicts, “We’re just at the tip of what we can do with this technology.”

Another recent development in 3-D mapping is LiDar, or light detection and ranging. LiDar is a remote sensing technology that uses ultraviolet, near-infrared light to understand the position of various objects in relation to a sensor. This information is then used for real-time mapping. LiDar drones use rapid pulses to map the surface of the earth, pointing out differences in terrain and composition.

Cities across the country are already experimenting with LiDar’s 3-D mapping capabilities to improve emergency response outcomes. The City of Memphis, for instance, is partnering with the University of Memphis to implement 3-D mapping technologies at nine facilities. The project will use sensors and cameras to survey occluded areas and produce annotated 3-D models of indoor spaces for public safety officials. 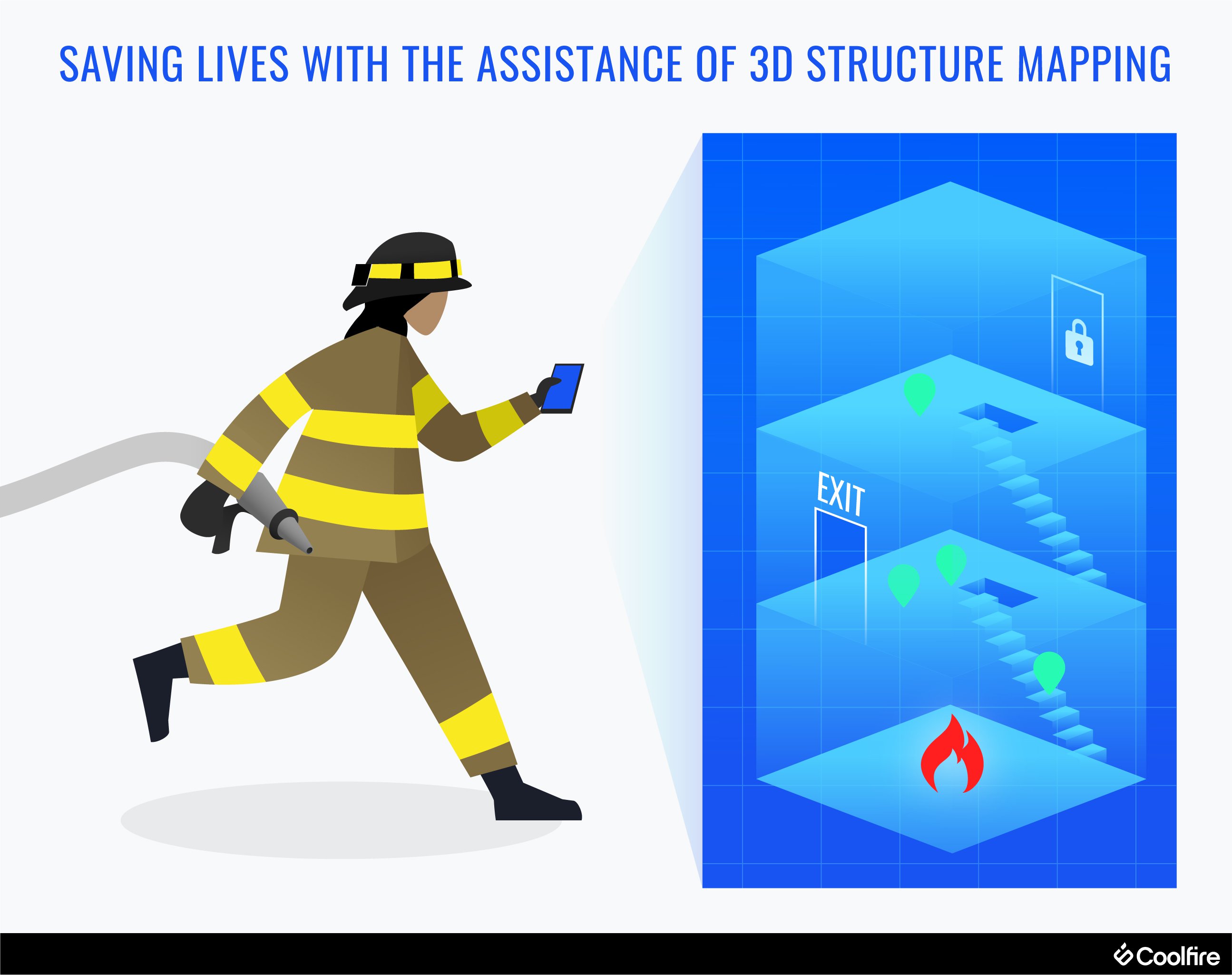 3-D mapping technologies promise to transform how first responders operate, but integrating new technologies can be difficult. An ongoing challenge will be integrating mapping data into communications in a way that is actionable rather than overwhelming. To incorporate 3-D mapping data as effectively as possible, first response teams must not only deliver location information — they need to deliver it to the right person, right when they need it.

To make the most of new tech like 3-D mapping, municipalities and first response teams must effectively incorporate these technologies into existing workflow and protocols. First responders will need tools and apps that can consolidate environmental information from various sources to meet real-time demands. Data generated by mapping tools must be seamlessly delivered through communication tools and presented as actionable insights for first responders.

A workstream collaboration tool like Coolfire’s can help. By relying on one unified hub for alerts, relevant technologies, and team communications, first response teams can streamline operations for the best results. By integrating new IoT technologies with task-based messaging systems, Coolfire makes it easy to understand an environment and communicate around what matters. With enhanced knowledge at their fingertips, first responders can arrive at decisions quickly, promote their own safety, and save lives.

← Prev: The End of the Golden Age of Email Next: Make Unstructured Data Your Competitive Advantage →
